CONCORDBANK - сonnect to the Universe!

JSC “JSCB “CONCORD" was founded on August 7, 2006. In 2012, its main beneficiaries were Olena Sosiedka and Yuliia Sosiedka, which became a new stage in the bank's development. During this time, 14 branches were opened: 4 in Dnipro, 3 in Kyiv, 2 in Odesa, as well as in Lviv, Kryvyi Rih, Zaporizhzhia, Novomoskovsk and Kharkiv.

Since 2016, CONCORDBANK has its own processing center "ProCard", making it completely independent in everything - from the issuance of state-of-the-art cards to terminals, from providing bonus systems to super-speeds in payments.

JSC “JSCB “CONCORD" was the first among small and medium-sized banks in Ukraine to become a principal member of the payment
systems Mastercard, Visa and Prostir.

During the entire period of activity (since 2006) the bank has issued more than 100,000 payment cards, each of which can be connected to Apple Pay, Google Pay and Garmin Pay.

Our TOP management
According to the NBU classification, the size of the assets of CONCORD Bank corresponds to Group II of banks. CONCORD Bank is a member of professional associations and communities - in Ukraine and in the world.
Bank rating

Dynamics of the credit rating of CONCORD Bank 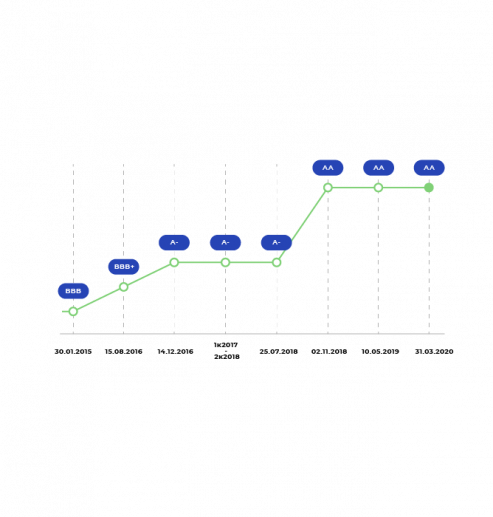